Recently, I attended a session at DEVIntersections on Dev Containers presented by Burke Holland. Prior to attending the session, I knew of Development Containers, or Dev Containers for short, but didn’t understand them. This session helped me understand what they are and how to use them. I figured that I would share what I learned with you.

What are Dev Containers?

According to the Development Containers website, developer containers are:

A Development Container (or Dev Container for short) allows you to use a container as a full-featured development environment. It can be used to run an application, to separate tools, libraries, or run times needed for working with a codebase, and to aid in continuous integration and testing. Development Containers can be run locally or remotely, in a private or public cloud.

Ok, so basically, a development container uses Docker behind the scenes to create your development environment, so you don’t have to. Because I do a lot of presentations and demos using different languages and frameworks, it will allow me to have a cleaner machine, plus be able to work on multiple projects at the same time without having to worry about if I have the correct version of a language or framework installed.

You need three things to get started with development containers:

More on getting started can be found here.

The Developer Container is described by a file devcontainer.json which sits in a folder called .devcontainer in the root of your project. You can create one in Visual Studio Code by using the command Dev Containers: Add Dev Container Configuration Files... from the Command Palette (Ctrl+Shift+P).

NOTE: Previous versions of this extension were called Remote Containers.

You will be presented with a list of options to choose from:

I chose the From a predefined container configuration definition... option and was presented with a list of options to choose from: 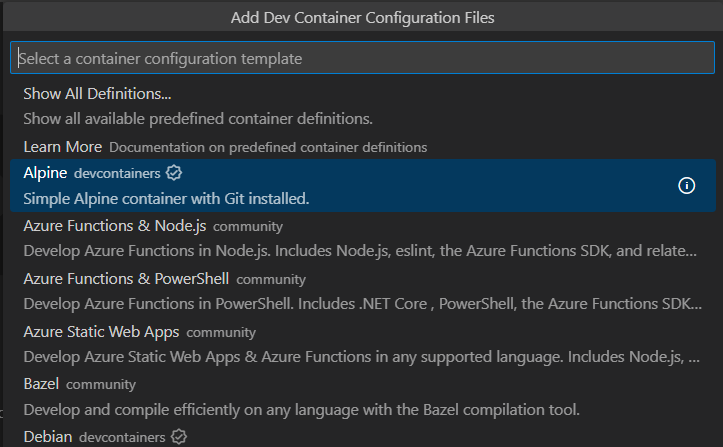 There are a lot of templates to chose from, since I was working on my blog which is a Jekyll site, I selected the *Show All Definitions...* option and chose Jekyll from the list.

You can see the full list of templates here.

Depending on which container template you choose, you may be presented with additional options or versions. After the version is selected you will then be prompted to Select additional features to install. Here is where you can add additional tools to your container like Git, Angular, or Node.js.

A full list of features can be found here.

In my scenario, I did not need any additional features, so I clicked Ok. In a few seconds, the files were created, and I was ready to start working. There was a devcontainer.json file created in the .devcontainer folder in the root of the project.

In my case, there was an extra file called post-create.sh, more on that later. The .devcontainer folder now looks like this:

In the first few lines, outside the comments, you will see a name and image property. The name is the name of the template and the image is the image that will be used to create the container. So, in this example, I am using the Jekyll template and the mcr.microsoft.com/devcontainers/jekyll:0-buster image. Most of the other lines are specific to the type of template you chose, but are relatively common across all templates.

For more details on the devcontainer.json file, see the specification.

For Jekyll, we need to customize a few things. First off, we need to forward ports 4000 (Jekyll server) and 35729 (Live reload server). This can be done by adding the following to the devcontainer.json file:

…which is outlined in lines 11-16 in the first .devcontainers.json.

Next, we need to make sure that bundler is installed and all the gems are installed. This is done with the postCreateCommand property. For this property, we execute the post-create.sh script that was created in the .devcontainer folder.

The template provides a default post-create.sh script that looks like this:

The customizations property in the devcontainer.json file is where you can customize the instance of Visual Studio Code that will be used in the container. This is where you can add extensions, settings, and more. For me, there are four extensions that I need to have when working with Markdown and Jekyll:

You can add them to the devcontainer.json file like this:

You can also add additional settings to the customizations section. Details on Visual Studio Code settings can be found here.

You may be prompted by a notification that says:

After the container is built and the postCreateCommand script, if any, is run, you should see a message in the terminal, “Done. Press any key to close the terminal.”.

Feel free to close the terminal and start working on your project.

Now with the .devcontainer.json file in the project, whenever you open the folder in Visual Studio Code, it will ask you if you want to open the project in a container.

You can click on the green icon in the lower left corner of the window that says Dev Container:, along with the name of the container, to close the container. You can also open the Command Palette (Ctrl+Shift+P) and select the Remote: Close Remote Connection command.

This morning I was working on a blog post on getting started with Developer Containers. For this, I opened up Visual Studio Code and JetBrains Rider. Once I...

While I was presenting my workshop Building and Deploying a New Cloud App from Scratch at DEVIntersections yesterday the connection to the database kept fai...

This book is broken up into three parts. In the first part, the author defines what software architecture is and what makes a good architecture. The seco...

I am a Microsoft Developer Service MVP, running for a Board of Directors position on the .NET Foundation. I have been an MVP since 2008. I have spoken at mul...